Order for Guest/Gwestai
Your shopping cart is empty.
Shopping Cart

BLAS is Pontio’s arts participation project offering children and young people various experiences of the arts. There are three aspects to BLAS, firstly we have our weekly drama workshops for children and young people, from year 3 to 13. Secondly, our health and well-being arts projects with children and young people. Thirdly, our youth arts projects in conjunction with professional companies that visit Pontio. BLAS was launched in January 2013 following a successful bid for funding from Arts Council of Wales, and since then it has gone from strength to strength undertaking a number of projects with inspiring practitioners and Bangor’s enthusiastic children and communities. BLAS is run by Pontio Arts Development Co-ordinator, Mared Elliw Huws. The project is funded by the Arts Council of Wales and the Widening Access programme at Bangor University Weekly Drama Workshop Pontio Studio   Weekly drama and performance workshops to develop confidence, stage presence, performing skills and have fun! Where: Studio When: Every Monday and Wednesday night – Term Time Monday: 5:00pm – 6:00pm – Years 3 and 4,  6:15pm – 7:15pm – Years 5 and 6, 7:30pm – 8:30pm – Years 7, 8 and 9  Wednesday: 7:30pm – 8:30pm – Years 10 - 13 Cost: £25 (discount code available for residents of LL57 1 area) Workshops are held mainly in Welsh. It is not essential to be fluent, and we welcome everyone of all language ability. Contact the Box Office on 01248 38 28 28 to register. For more details email Mared: m.huws@bangor.ac.uk

Here's a snapshot of the great work BLAS has done...

Every term the BLAS members put a show on in Theatr Bryn Terfel. They work on the show throughout the term and put it together, bringing their own ideas to the stage with the guidance of Mared and the BLAS tutors. Here are the shows we’ve seen them do over the past few years.

Rhin was BLAS’ first ever show back in 2016. There were 72 children on stage in this devised show, and all had their own, unique character. Where did the water go? Without water, everyone and everything suffers, so, four insignificant characters went on a journey to solve the mystery.

This ensemble piece was the creation of the young and talented members of BLAS through devising and ad-lib work. The work began at the end of the summer term in 2017 and was performed in November 2017. 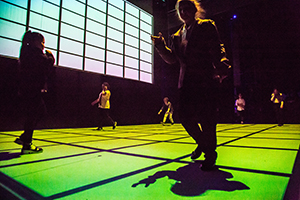 The two classes of BLAS Bach came together to create their own devised show. They played with different ideas and characters and came up with a story that turned your world ‘upside-down’. It included drama, dance and circus skills! 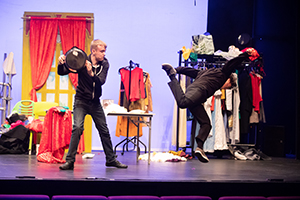 BLAS Hŷn’s devised show in 2018. Lies Spell Murder at Green Cable Manor by Rowen Postelwaite is being performed tonight! S.A.L Youth Theatre Company are busy preparing as the audience take their seats. But everyone has a secret … will tonight reveal those secrets? 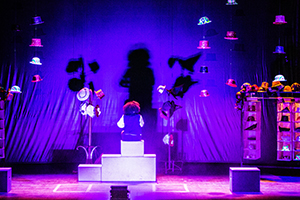 Be careful what you wish for A hat is a wonderful thing, it keeps you warm, and can change the way you look. But what if it could do more than that? What if it could make your dreams come true? A dream? Or a nightmare… 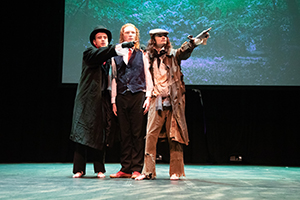 A selection of sketches that were created by the members of BLAS during their workshops on theatre Absurd and Satire. The BLAS gang led you though the world of the Absurd and Satire to see how absurd life really is.

Over the years we have run many health and wellbeing projects, working with various organizations and schools to bring generations together through the arts. 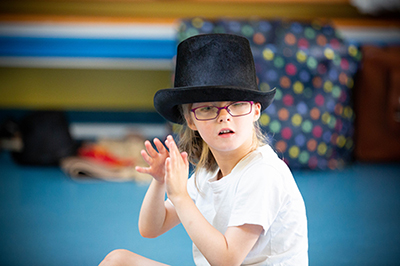 Exploring Girls’ Confidence Research undertaken in the US suggests that girls begin to lose confidence in their innate ability by the age of 6. BLAS spent ten days with pupils from Ysgol Llandegai to observe if there is evidence of this trend here in Wales and questioning if the arts have a role in preventing this inequality. 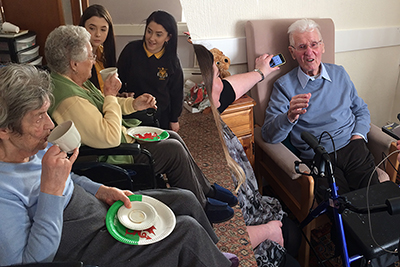 Lleisiau / Voices We explored the power of conversation between young people and those living with dementia in bridging worlds and alleviating isolation. We recorded conversations between pupils for Ysgol Friars and the residents of the home to create a verbatim play that was performed in front of family, friends, academics and people who worked in Dementia Care followed by a Q&A session. 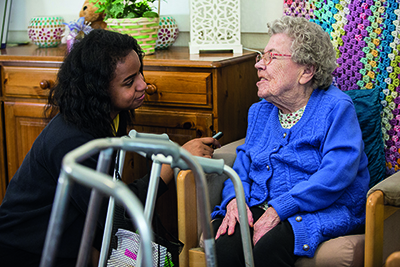 Ein Lleisiau / Our Voices Our Voices was a development of the 2017 Voices project to hold and record conversations with people living with advanced dementia. The verbatim play was read to friends, family and specialists in our Studio Theatre. 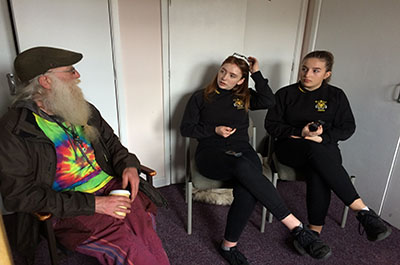 Lleisiau’r Stryd / Street Voices Our latest project in 2019 under the ‘Voices’ strand was working with St Mary’s Hostel in Bangor, a hostel working with homeless people. Students from Ysgol Friars recorded conversations with the users of the hostel to produce a verbatim play that was read in a special evening for family, friends and peers in our Studio Theatre.

In 2015, 2017 and 2019 Pontio held a Gwledd SYRCAS Feast event, with a variety of circus events happening in Pontio and around Bangor for between 1-2 weeks.. BLAS have had the pleasure of working with companies from across the globe as well as with local schools and organisations to open our feast of contemporary circus with a procession through Bangor!

BLAS has been fortunate to work with the numerous companies who visit Pontio to engage the local community and give people of all ages a taste of the arts. 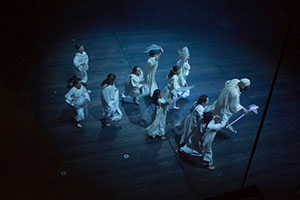 Mae Yna Le | There is a Place 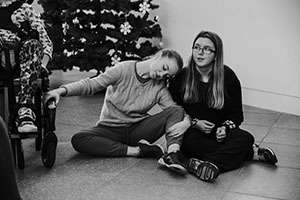 A project with Ballet Cymru and Ysgol Pendalar, Ysgol Cefn Coch and Ysgol Hafod Lon that gave children an opportunity to perform in Pontio’s public spaces before the company's performance of The Light Princess. The second part of the project saw eight students from Bangor Dance Studio developing and performing a scene that became a part of the show. 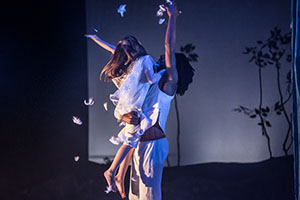 balletLORENT auditioned local children to appear alongside professional dancers in their production, Snow White. The 12 successful candidates received dance and movement workshops from Gavin and Natalie from balletLORENT in preparation for working with the professional company and local dance practitioner Ceri Rimmer. An image from this production is seen on the wall in Cegin on lefel 2. 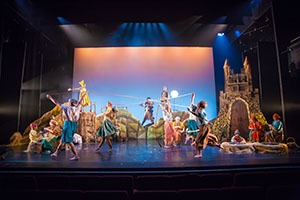 balletLORENT returned in 2018 with a new production, Rumpelstiltskin. 90 children came to open auditions at Ysgol Glancegin and Ysgol Bro Dewi and 7 young local children were chosen to be in the production. They also had a reunion workshop with the local youth cast from Snow White back in 2016. Two of these were cast as Young Rumpelstiltskin and the Young Shepherds Daughter. As well as a young local cast 14 local people auditioned and five ladies were cast. The age range of the community cast varied from 5 years old to the eldest who was 91. 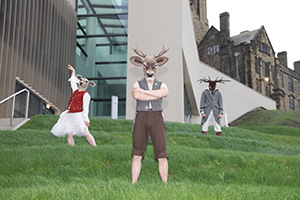 The purpose of this project was to create a pre-show performance for Citrus Arts’ production A Savage Heart. We worked with 10 young girls from Bangor Dance Studio, and the project was led by James Doyle Roberts who encouraged the girls to devise their own work and develop their confidence. 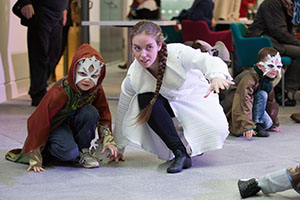 BLAS has undertaken numerous community and engagement projects in and around Bangor. 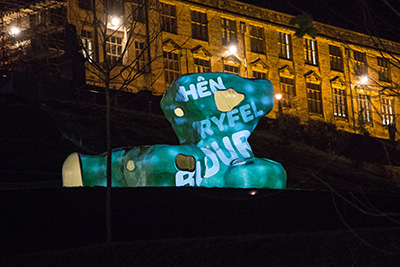 Caban - Remembering the poet Emrys Roberts To remember Emrys Roberts, we held poetry workshops in schools with the poets Mererid Hopwood and Ifor ap Glyn. All the poems were projected onto the walls in Pontio’s public spaces and the Caban public art piece, as part of a special projection performance. This project would not have been possible without the support of Emrys and Megan Roberts' family. 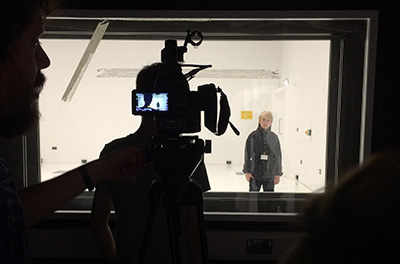 Pontio’s Selfie As part of the Ffilm+ project for families over the summer, we organised a fun film project. Over the course of three afternoons, Eilir Pierce helped a group of young people create a short film for themselves under the title ‘Hunlun Pontio’ (Pontio's Selfie). The finished version was shown in our cinema alongside a Q&A. 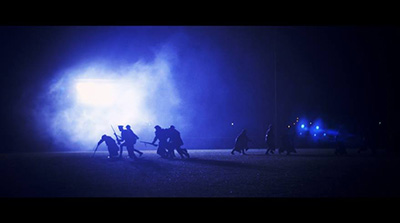 Dawel Nos, Silent Night, Still Nacht In December 2014, we commemorated 100 years since the Christmas Truce of the First World War with a theatrical performance followed by a football game played by the under 13s and 14s of Bangor City Football Club’s Academy with music by Côr y Penrhyn. 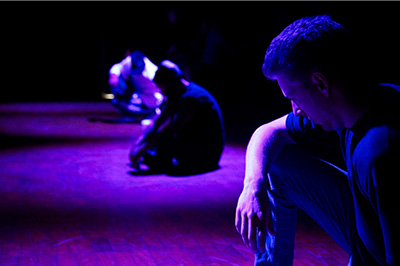 Rydych chi yma During 2014 Firenza Guidi held workshops with years 5 and 6 in Ysgol Glancegin, Y Faenol, Ein Harglwyddes, Glanadda, Hirael and Hillgrove to coincide with a scheduled performance for the opening season of Pontio, Mae Yna Le. The first stage in the development of this was a show in PJ Hall called Rydych Chi Yma. Involved in the project was Ed Holden, choreographer Sarah Mumford and the professional street dancers Steel City Rockers. 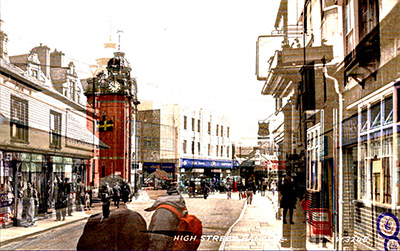 A’i Bangor? A’i Bangor? was created as a project in the run-up to the opening of Pontio. As the community couldn’t come to us during the build, we went out into the community to see what workshops we could offer that would be beneficial to local people. We worked with a wide range of children and young people through the Urdd, Bangor Dance Studio and Maesgeirchen Youth Club.